Compact, versatile and extremely cost-effective, you will find a wide variety of portables radios that will enhance your business performance. Education, Colleges and Universities, Manufacturing, Security, Hotels and more can count on the RCA brand. If you're looking for radios that are simple to use, effective and reliable and at a fraction of the price of other leading brands, then these are the radios for you.

Most of the RCA portable product line can operate on both digital and analog, and are available in either VHF or UHF. These radios are guaranteed to work with virtually any other brand of two-way radio. So if you already have another brand, fear not, RCA 2 Way Radios will work with your existing radios. 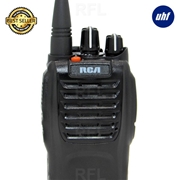 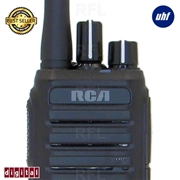 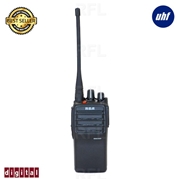 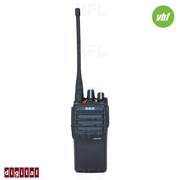 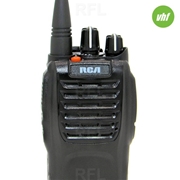 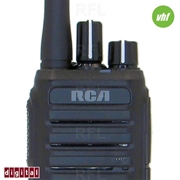 We offer a full collection of proven RCA Portable 2-Way Radios for your important and critical communication needs. They’re all ready to help ensure you perform with greater authority and confidence.

RCA's diverse array of commercial portable two-way radios enable you to efficiently coordinate and communicate with your mobile workforce. Ideal for use by a variety of industries looking to remain competitive in today’s market, RCA radios deliver a high-quality communication solution designed to help increase efficiency, productivity and worker safety while lowering operating costs.


Number of Users / Channels
The number of individual users as well as the number of talk groups you need to maintain determines the number of channels you will require in a radio. For example, if you wish a certain department to maintain its talk group, it would require a dedicated channel for that department. If two or more individuals need to maintain private communications, a dedicated channel would be required. It is not uncommon to have multiple channels within a department for special projects where more than one operation or event is occurring simultaneously. In addition, the use of digital technology increases the capacity of your system by dividing your existing channels into two time slots. This enables you to double the number of users on your system without the need for additional infrastructure equipment. Lastly, when making decisions regarding the number of channels you require, it is critical to keep future expansion in mind.

- Intrinsically Safe:
Intrinsically Safe is a designation which affirms that a portable radio, with an attached certified battery, is safe for use in locations where flammable gas, vapors or combustible dust may be present according to the Division, Class and Group for which it has been approved.

- Technology:
Two-way radios have traditionally used analog technology. Digital technology is the next generation of two-way radio and offers several advantages over analog including clearer audio, integrated data applications, 40% longer battery life and increased capacity. The choice between analog radios and digital radios is not that difficult. If you have an existing radio fleet and are currently using analog radios, your investment is safe for many years to come. If you're considering new radios for a new fleet or a new project, the digital alternative offers advantages over the analog technology. RCA also offers a hybrid solution that gives you the best of both worlds. - Still confuse, were here to help.